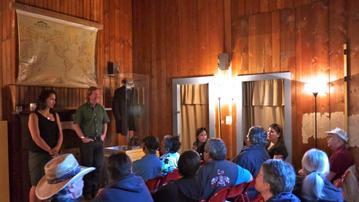 John Schuttler (pictured standing on the right) has visited our community several times to speak with locals and to give updates on his book titled, "Don't Call Them Indians: the contradictory experiences of the Metlakatlans of Alaska". We have complete manuscripts available via dropbox if you are interested in reading it - email us at duncancottagemuseum@gmail.com
Sm'algyax Talking Circle

For those who may be unfamiliar - Sm'algyax is the name of the language that the Ts'msyen people speak and we will start our Sm'algyax talking circle back up soon. It is open to all levels of fluency - even if you do not know any Sm'algyax please come join us anyways.

Movie Night at the Museum

At movie night at the museum we have shown, "Let's Learn Tsimshian - episodes 1-10" with the voices of Arnold Booth and Mary Eaton-Booth as puppets acting out various skits, and a short 30 min documentary type film titled "Metlakatla 1987" which was filmed by KTOO during our communities centennial celebrations.

Coming up by the end of February or beginning of March when we thaw out a little we will show a few more movies - we will post flyers, update our Facebook page and this site when time comes close.